Not All Ballet Birds are Swans: “Firebird” comes to Lydia Mendelssohn Theatre

“The Firebird” was a breakthrough piece for composer Igor Stravinsky, who composed it for the 1910 Paris season of Diaghilev’s Ballets Russes.

Maybe it will be a local breakthrough, too, for another Russian-born artist: dancer-teacher Nikolai Morschakov, who, having relocated to Michigan, recently opened a studio, the Russian Ballet Academy of Michigan, in Ypsilanti’s Riverside Arts Center. Saturday evening at Ann Arbor’s Lydia Mendelssohn Theatre, he offers the ballet, with a cast of student dancers, as a sort of calling card.

“Somehow it happened I was never introduced to this ballet until I recently saw it,” said Morschakov, a former principal with the famed Grigorovich Ballet who trained at the Russian State Choreographic Institute in Saratov (where his teacher was a former Vaganova Ballet Academy classmate of Mikhail Baryshnikov). “I decided it would be the right choice for me,” he continued, “a Russian fairytale.  I found it very interesting, and I wanted to make an announcement in the community, I’m Russian, representing a strong Russian profession, and I’m willing to contribute all my time to make it happen.”

The hero of “Firebird,” Prince Ivan, gets a wish granted – having captured the magical firebird, a creature in the enchanted kingdom of the Immortal Koschei, where Ivan has landed, he can solicit her help simply by calling on her; he has her magic feather, after all. And call on her is what he does so he can marry one of the princesses Koschei has imprisoned.

Morschakov, too, has had a wish granted – to contribute all his time to the ballet. Though he’s retained Michel Fokine’s original choreography for Ivan and the Firebird, he has largely re-choreographed the ballet, basing it on the traditional choreography; made the stage props; gathered the costumes (including one, from Russia, that replicates the prince’s original costume); and, of course, taught the dancers, all serious students and devoted supers, their roles and supervised rehearsals. He’s had help, from local professionals, with lighting and design, for example; and he’s gotten a boost from students’ parents: some of the princesses are the moms of some of the dancers, he said.  The ballet will be performed to taped music. 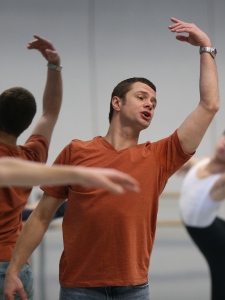 He’s worked in cooperation with Ginny Durow at Ginny’s Danceworks, a local dance school in Brighton; several of the principals have trained at her school as well as worked with Morschakov. The cast includes three in that category — Isabella Vincent as Firebird; Reese Durow as Prince Ivan; and Madeline Kreps as the Princess – and Morschakov’s student, Issac Anderson, as Koschei.

Morschakov came to Michigan after dancing and guest teaching in other U.S. locales. Before turning freelance a few years back, he was a principal dancer with Sarasota Ballet and then with Dance Alive National Ballet. He was also a laureate of the Phillip Morris International Ballet Competition in 1999 and 2001.

“I was working here and there,” he said, “there was no particular school I was attached to. Before, I was living in Florida, which was not for me. I always wanted to live in a climate where I could have all four seasons. This winter has been kind of tough, but at the same time it really wasn’t hurting me. “

In addition to teaching at his Ypsilanti studio, he has also been teaching at Marygrove College.

Of course, there is the music. “It is touching me so deep,” he said.

And then there is the Firebird as an “analog to the phoenix bird, the resurrection idea,” he said.

“But what I like about the Firebird, first of all, is the fairytale,” he continued. “All Russians grew up with fairytales. What I like personally, maybe I am just living delusionally, but I really like the fact that at the end of each fairytale, good energy and good people are always winning over the evil. That’s kind of my life’s philosophy.” 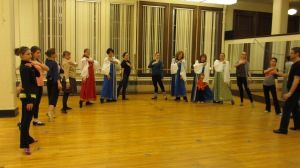 This entry was posted in Uncategorized. Bookmark the permalink.

2 Responses to Not All Ballet Birds are Swans: “Firebird” comes to Lydia Mendelssohn Theatre