Chamber Music from the A2SO: A Sweet Way to Spend an Afternoon 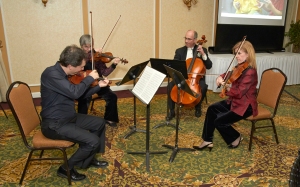 I’d probably like any event where you get dessert before the meal.

And that’s just what the Ann Arbor Symphony Orchestra Chamber Recital Series offers: dessert first, then an hour-long concert, starting at 1:30 p.m..  You’re done by 2:30 p.m., just in time to think about dinner.

For its chamber recital season finale, this Friday, May 9, at the Jewish Community Center of Greater Ann Arbor (the series’ regular home), the A2SO really has some sweet treats in store: two terrific quartets, by Haydn and Dvorak, played by the orchestra’s crème de la crème.

Who might that be? Let’s take it from the top. A2SO Music Director Arie Lipsky is also an accomplished cellist and a dedicated chamber music player who spends summers at New York’s Chautauqua Institute directing the chamber music program  and playing with the New Arts Quartet there. He’s Friday’s cellist, with an all-star lineup from the orchestra making up the remaining quartet players. Concertmaster Aaron Berofsky and A2SO principal second violin Barbara Sturgis-Everett occupy the violin chairs. Berofsky’s wife, Kathryn Votapek, the orchestra’s associate concertmaster, trades her fiddle for the viola for the occasion.

On the bill are Haydn’s Op. 77, No. 1, “The Lobkowitz,” a brilliant quartet from Haydn’s last set, written around the same time (and for the same patron) as Beethoven’s first set of quartets; and Dvorak’s Quartet in E flat major, Op. 51 ” Slawisches,” from 1879.

It’s a winning  combination, not just for audiences but for the players, starting with Lipsky.“I always enjoy playing chamber music with members of the A2SO,” he says. “I think it strengthens the special bond that I have with our most important assets — our wonderful musicians. This particular program has a special meaning for me as this Haydn was the first quartet that I ever played — a perfect introduction to chamber music for a 12-year-old boy. The Dvorak quartet is an example of how the Slavic composer balanced his Czech heritage and spirit with the European/German romantic tradition.”

And did we mention the price is right? You can’t even do a movie and popcorn for the $10 it’ll cost to nosh and listen on Friday.